2019 was another fantastic year from our fantastic volunteers, who clocked up a staggering 3485 hours between them, more than double the number in 2018 and that’s despite having to cancel 2 Sunday cleans because of bad weather! This equates to approximately 67 hours per week, the equivalent of 2 paid workers! We collected 306 FULL BAGS – and by full, we mean just that as we combine the bags at the end so as to recycle them.   We cannot thank you enough for turning out in all weathers, always cheerful and glad to play your part in keeping our beach clean and safe. We look forward to another phenomenal year in 2020.

Big thank you to Sainsbury’s, Crosby

To mark its 150th birthday celebrations, all Sainsbury’s stores across the country embarked on 150 days of community service. Friends of Crosby Beach were very proud to be chosen as the partnership organisation with the Crosby store. The manager, Mike Hayes and a number of his staff have turned out at the regular Sunday cleans and the store has raised a whopping £500 for equipment. FoCB is very grateful to the staff and customers of the Crosby store.

Afternoon of fun, information and creativity at this year’s Marine Awareness event

Our first Marine Awareness event in 2018 was really good but last year’s was even better and we are now in the process of organising this year’s on Saturday 16th May which promises to be better still.   Last year the beach was buzzing with people, children and activity. There was a wonderful display of rubbish and plastic fossils by Hightown Beach Clean group and Tommy Norbury was full of praise for the event, saying it was “well organised, well attended and there was a lot of interest”. LovemyBeach’s Hannah Barnes said it was ”good to see so many people who care about their beach, the marine environment and the planet” and this was echoed by Lancashire Wildlife Trust, Greenpeace, the RSPB and everyone there. At the Liverpool City Region Year of the Environment stall, lots of people filled in the pledge cards to make small changes in their lives to help the environment.

Liverpool University and the National Oceanographic Society brought their scaled-down model of WireWall and geeky fun was had with water pistols and Lego. The RNLI team was there, with their vehicle, to advise on beach safety and the Green Sefton Flood Defence team showcased their dunes mapping system. The two guided walks led by John Dempsey of Green Sefton were extremely popular, with just under 60 people taking part. He said, “It is always a privilege to show people the splendour of the Sefton coast, especially Crosby beach and the dunes.”

As well as all the awareness raising about the urgent need to protect our marine environment, there was loads to do and create. A special feature was a temporary mural on the United Utilities wall, inviting children (and adults) to paint-stamp shoals of fish swimming in the sea. Another enjoyable activity was a sand sculpture of a gigantic turtle, complete with baby turtles. Practically every stall had creative activities, together with a treasure hunt, guessing the number of cotton buds in a jar and identifying piles of plastic rubbish, all collected from the beach. 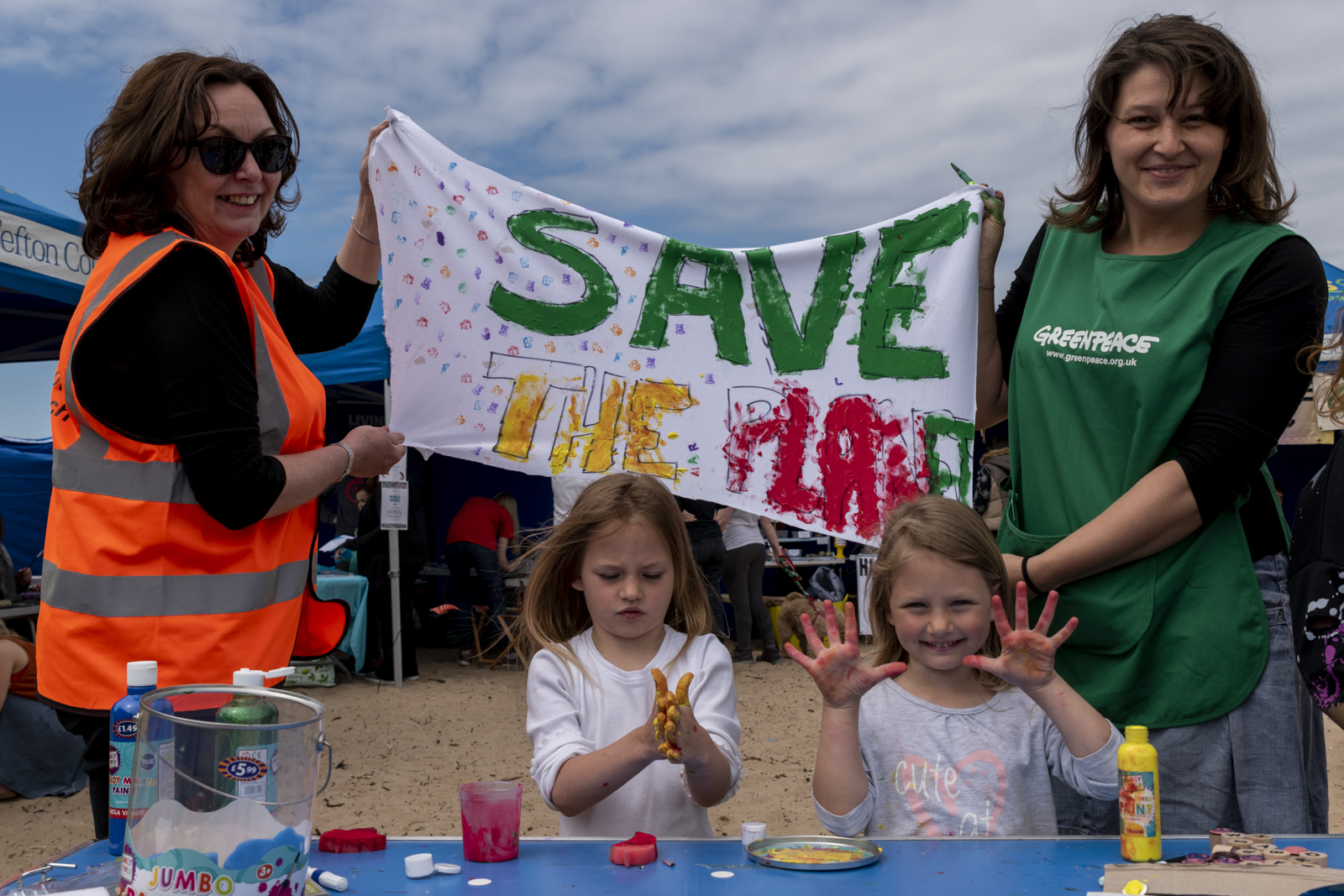 The final word comes from two young visitors. Evie, aged 10, pronounced the event “a very good idea because it is very good for the environment” and Amelie, aged 9, declared that “the beach is really important to people round here so it should be looked after.” Which is exactly what the wonderful volunteers of Friends of Crosby Beach do at least once a month.

We are always in need of more (and replacement) equipment, as well as a storage container. Blundellsands and Crosby councillors gave us a much appreciated start by buying us some equipment.  After this we were very fortunate to be given donations by Unison in Waterloo, Sea Changers, Tesco Bags of Help, the Waterloo Festival and Sainsbury’s Crosby.  We are enormously grateful to them all.